Pick a Pinch of Parsley

PICK A PINCH OF PARSLEY

For quite awhile now I have “gardened” a landscape of native tree, shrubs, annual and perennial flowers. In some ways I think this has been moderately successful, and in more ways, spectacularly unsuccessful. We learn from our mistakes.

The goal, to provide plants for the “Bs”: Butterflies, Bees, Birds and Beneficial Bugs. The trees and shrubs have offered flowers, fruits, seeds and leaves for the “Bs” while, the perennials and annuals provide primarily nectar and pollen. 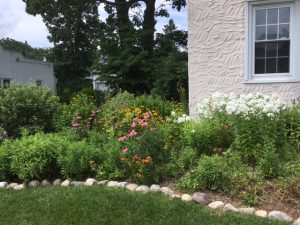 But it was the non-native, annual parsley growing in abundance that was full of surprises in September. Usually, I plant 3-4 parsley patches and sometimes find a few caterpillars in the spring and raise them inside. They eat a lot and often I run out of parsley to feed them. 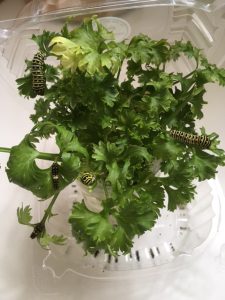 However, this spring more parsley plants produced fewer caterpillars. The parsley kept growing through summer, did not bolt, was lush, full and deep green into September. So, I picked a few pinches of parsley, plunked them into a glass of water on my kitchen windowsill and snipped some leaves to use in cooking.

Then, one day, to my surprise I noticed a few very tiny black dots on the windowsill. Thinking it was dust from the dirt piles of the construction site next door, I ignored it.The next day the dots were noticeably bigger. Hmmm! I was suspicious so I searched through the tight bunch of stems and sure enough, found a black/white, bumpy, ¼ inch “rod” hidden amongst the parsley leaves.

So, I carefully extracted the parsley stem with the “rod” and 3 – 4 other stems, placed them through the straw hole in the cap of a clear plastic cup and filled it with water.

Amazingly, the bumpy black and white rod was a swallowtail caterpillar. It grew larger each day. So did those black dots, known technically as “frass,” or what any kid would gleefully call “poop.”

Several days later, tiny dots of frass appeared among the daily larger dots. Aha! And again, another caterpillar appeared from the old bunch of parsley.

The caterpillars grew fast. There was plenty of fresh parsley from the garden to replace the old stems stripped of their leaves by the voracious “cats.”

In due course the first caterpillar disappeared from sight having crawled out of the parsley, down the outside of the cup and under the paper towel lining the bottom of the plastic bin containing the cup. Then, it formed its chrysalis under the paper towel so I scotch taped a piece of the towel with chrysalis, onto the inside wall of the bin so when it came out of the chrysalis as a butterfly it could easily pump up its wings. 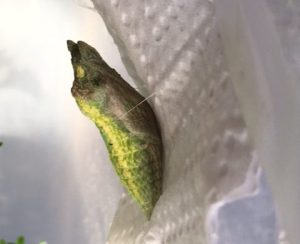 The second caterpillar decided to go into chrysalis on an old parsley stem.

Knowing from past experience that these late chrysalises would either produce a butterfly soon or overwinter and reveal a butterfly in spring I moved the bin to the garage and more natural temperature. I glanced at it each day to see what might happen.

And AGAIN tiny black dots appeared at the base of the stem of the wilted, drying parsley left in the cup. Closer inspection revealed not one but TWO tiny black with white bumpy rods. YUP! Two more caterpillars from that almost leafless, lifeless parsley stem! 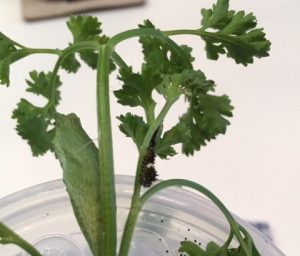 So, as I write this to meet the submission deadline the pinch of parsley has produced 2 chrysalises, and 2 more growing swallowtail caterpillars. What will their fate be? Overwinter or become fall butterflies? We’ll just have to wait and see!

The message of this tale:

Plant Plenty of Parsley next spring.

Pick a Pinch of Parsley.

Maybe you too will become a Swallowtail Parent!

However small or large your home landscape is you can make a place for the “Bs” and other wildlife by planting native trees, shrubs, flowers and specific herbs. Each native garden adds much to the survival of biodiversity and the web of life.

Is There Such a Thing as Free Solar?

IS THERE SUCH A THING AS FREE SOLAR?  By Irene Heifetz – Guest Blogger for…

My Little Slice of Heaven

My Little Slice of Heaven  Why I love the New Jersey Coastline  Theodore Palumbo Jr. – October 10,…