When complete, the Essex-Hudson Greenway (EHG) project will be a unique multi-use trail along the decommissioned NJ Transit Boonton Line running from Montclair to Jersey City. The right-of-way (average width 100 feet) winds through residential neighborhoods, business districts, wooded corridors and a beautiful section of the Meadowlands with Kearny Marsh on one side and the Sawmill Creek Wildlife Management Area on the other. We at Hackensack Riverkeeper are excited to help create better walking and cycling access for people in our watershed region through this ambitious project.

A sort of coastal/urban counterpart to the mountainous/rural Appalachian Trail, the East Coast Greenway begins in Calais, Maine on the US-Canada border and runs south for roughly 3,000 miles to Key West, Florida; ninety miles from Cuba. Several years ago, a friend walked the entire New Jersey section from Fort Lee to Trenton. The biggest obstacle he encountered was something the EHG is dealing with today: the Hackensack River.

The Boonton Line crosses the Passaic River on a decommissioned bridge high over a stretch of river that rarely sees boat traffic, but it crosses the Hackensack over a very low bridge, where there’s a lot of vessel traffic, as Captain Bill Sheehan and I can attest. Based on that situation, in 2002 the U.S. Coast Guard (the federal agency tasked with regulating bridges over navigable waterways) ordered that the line’s Hackensack River bridge be locked in the open position. And it’s been that way ever since. Boats can easily pass the open span, located within sight of Laurel Hill Park in Secaucus, but it is impossible to walk or bike from one side of the river to the other.

Over the years many ideas to close the gap have been suggested including ferries, a suspended walkway, or routing the trail to a bridge with existing pedestrian/bike access. All fell short due to costs and/or the Coast Guard requirement to maintain a minimum clearance of forty feet between Mean High Water and the underside of any new structure.

Even before a workable solution is found – and one soon will be – the EHG will add 135 acres of new green space and connect existing parks and trails in two of the most densely populated counties in America. It will also enhance habitats and provide new wildlife watching opportunities. The corridor will also include rain gardens and bio-swales for stormwater management, and increased tree coverage to reduce heat island effects in the urban areas through which it runs. In short, it will be a very good thing for a lot of people.

The conversion of the Boonton Line into the Greenway has been a regional goal since 2002 when NJ Transit’s Montclair-Boonton Line and new Montclair station were completed and Norfolk Southern Railroad (which operated freight trains on the line) discontinued service. In 2020, the Open Space Institute, working with partners New Jersey Bike & Walk Coalition and the 9/11 National Memorial Trail, secured a time-limited purchase and sale agreement for the line from Norfolk Southern, which still owns the right-of-way. Also that year, both the Essex and Hudson Boards of Commissioners passed resolutions supporting the project. But the BIG news came in February of this year when the NJ Department of Environmental Protection announced it had completed a $65 million purchase agreement with Norfolk Southern for all 135 acres. This once-in-a-lifetime opportunity will soon become a reality. But that’s not all…

Another bit of big news came our way in February this year when the Hudson County Division of Planning unveiled its draft proposal for a Greenway running roughly fourteen miles along the Hackensack River, Newark Bay and the Kill Van Kull. Dubbed the Hackensack River Greenway, the northern terminus will be Mill Creek Point Park in Secaucus, with Collins Park in Bayonne as is southern. Along the way, it will connect with county and municipal waterfront parks in Secaucus, Jersey City and Bayonne, including the brand-new Skyway Park in Jersey City.

The Greenway will also include connections to other walkways and bikeways, particularly in Secaucus and Jersey City as well as access to mass transit facilities such as Secaucus Junction and multiple Hudson-Bergen Light Rail stations. Oh, and if it hasn’t already crossed your mind, there will be a major connection/intersection with the Essex-Hudson Greenway as well. If you ask me, the amount of people who stand to directly benefit is almost staggering in its scope. 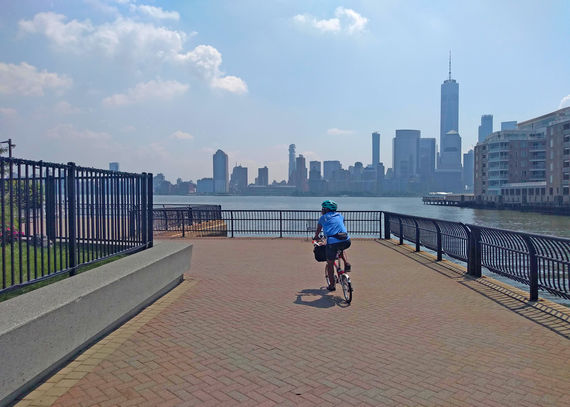 Of course, unlike trail-planning and construction in less developed areas, the county plan has a lot of moving parts and multiple stakeholders along its proposed route. Still, the planners have invested an incredible amount of effort and dedication to what many of us in this corner of New Jersey call “Hudson County’s Green Coast” and I, for one look forward to multiple ribbon-cuttings over the coming years. Hope to see you there!